I love all things horror — horror movies, scary stories, haunted house attractions, and of course, Halloween.  I’ve spent this October, like so many past Octobers, watching as many horror movies as I can find, from my old favorites (The Exorcist, Suspiria, the original Halloween) to new ones that I haven’t seen or heard of.  This latter category is more challenging; there are probably thousands of horror movies that come out all year long — most of them going straight to DVD — and as any tried-and-true horror fan will tell you, a good 90% of them are disposable.  And when I say “disposable”, I’m not talking about the so-bad-it’s-good variety (see: Basket Case, The Gate, or the immortal Troll 2), but the banal, every-cliché-in-the-book, one-size-fits-all slashers that you forget about five seconds after the credits start to roll.

But not all unknown or straight-to-DVD horror movies are bad or boring; in fact, I can think of several that were so scary, it’s downright tragic that they were denied widespread theatrical release here in the states.  Here are five great horror movies that you probably haven’t seen (but if you have . . . well, good for you).

The Abandoned is a joint British-Spanish film about an American woman who returns to her native Russia to learn about her family history.  You got all that?  Anyway, upon arriving at her rotting childhood home, she encounters something absolutely horrifying wandering around the upper story — and it’s determined not to let her leave.  This movie is far from perfect; the plot takes a few confusing turns toward the end.  But the creepy atmosphere and awful menace that she encounters are enough to make it enjoyable.

This is one of those movies that I can’t recommend highly enough.  It’s an Australian faux-documentary that tells the story of a family mourning the sudden death of their oldest daughter, who drowned in a nearby lake.  Her parents, brother and friends soon learn that she had been concealing a secret life in the year leading up to her death, and strange things begin happening around the family home.  A series of clues eventually leads them to the bed of a dried-up lake, where they learn what was tormenting her in her final days.

While that plot synopsis might read like a soap opera (plot synopses are not my strong suit), the climax of this film scared the shit out of me in a way that most scary movies don’t.  There’s also a sadness and a realism to it; suspension of disbelief is easy because, unlike the thousands of found-footage Blair Witch clones that have tried (with varying degrees of success) to do the horror mockumentary thing, this one is shot in the style of an actual documentary, not the “we found this footage in the basement of a rotting asylum”-approach that so many others take.  And it feels like a real documentary.  If you only see one movie on this list, I really hope it’s this one (and if you do watch it, stay for the credits for an extra layer of creepiness).

I’m going to admit right off the bat that this movie didn’t scare me very much; in fact, if I was ranking these movies by their fear factor, I’d probably put this at the bottom of the list, mainly because I’m pretty jaded to this particular sub-genre (satanic/slasher/babysitter-in-trouble).  However, I fucking love this movie, and not just for its scary moments.  The House of the Devil is set in the early 1980s and the director shot it to look and feel exactly like a horror movie filmed circa 1982; if I hadn’t known this movie came out in 2009, I would have assumed it came out long before I was born.  And the reason it works so well is because the director, Ti West, doesn’t take a satirical approach; he’s not trying to do a parody of an ‘80s horror movie, he’s doing an ‘80s horror movie, complete with the satanic panic themes that made ‘80s horror so grisly, shocking and fun. 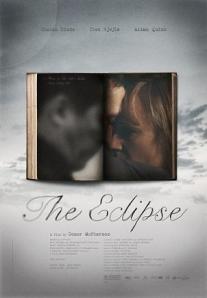 No, this has nothing to do with Twilight, don’t ever accuse me of liking Twilight.  Anyway, The Eclipse is odd in that, for the most part, it doesn’t seem like a horror movie.  It’s a serious Irish drama with serious actors (Ciarán Hinds and Aidan Quinn, to name a couple) that tells the story of a widower coming to terms with the loss of his wife while simultaneously getting acquainted with a female mystery writer who’s staying in the area.  It mostly plays like a sad, poignant movie, so when something absolutely terrifying happens, it comes completely out of nowhere and makes you shit your pants.  Then it transitions back to a serious Irish drama so seamlessly that you aren’t entirely sure what just happened . . . until it happens again, and you shit your pants again.  Highly recommended.  Bring a change of pants.

Most of the movies on this list are foreign productions; not because I’m a snob (my friends have to drag me kicking and screaming to see the latest depressing French or Syrian dramas at the local arthouse theater), but because I’m so used to the conventions of American horror movies that a lot of them don’t startle or surprise me anymore.  I think that’s why Asian horror (including American remakes like The Ring and The Grudge) has seen such a surge in popularity over the last decade; its motifs are less familiar to Western audiences, though some of them may already be turning a bit stale.  A Tale of Two Sisters is South Korean and tells the story of two sisters (duh) who struggle to get along with their father and new stepmother, who seems to harbor a lot of hostility toward the younger, quieter sister.  As strange things begin happening to the family, we learn more about their troubled history and why there’s so much animosity between the stepmother and the girls.  If this sounds familiar to you, it’s probably because there was a really shitty American remake called The Uninvited that came out a few year ago.  Stick to this one.

And that’s it for my list.  Maybe you loved it or maybe you think I have terrible taste; either way, I’m always looking for new ways to scare myself, so if you have any good horror movie recommendations that you don’t think many people have seen, post them in the comments.  Happy pants-crapping!