Readers of this blog may recall that in my last post, I listed five great horror movies you’ve probably never seen, and back in September, I wrote an essay extolling the virtues (if you can call them that) of truly bad art.  Kait suggested that I combine these topics and list the five worst horror B-movies of all time.  That’s a pretty tall order — much harder than listing the five greatest horror movies of all time (controversial though that list might be among horror fans and cinephiles).  There are thousands upon thousands of movies bad enough to make the cut, from made-for-TV SyFy Channel specials (I’m looking at you, Mansquito) to half the turkeys lampooned on Mystery Science Theater 3000.  So since compiling that list would be a herculean effort, I instead present to you a sample of five awful horror movies that everyone should see. 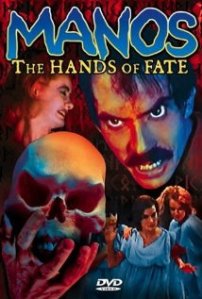 Back in 1966, a Texas fertilizer salesman named Hal Warren decided he was capable of shooting a scary movie on a shoestring budget, and he set out to write, direct and star in Manos: The Hands of Fate (which literally translates as Hands: The Hands of Fate).  Manos tells the story of an average American family — Mom, Dad, Daughter and Dog — who decide to stay the night at a mysterious “lodge” during a family road trip.  But they soon run afoul of a deranged cult, their Master, and the Master’s cloven-hoofed assistant Torgo (although the prosthetic designed to give Torgo the appearance of cloven feet only makes it look like he has really big knees).   The entire film was shot on a home movie camera since Warren apparently couldn’t afford a professional one, and since that camera wasn’t capable of picking up sound, all of the characters’ voices were dubbed in post-production by three people (including Warren himself).  In other words, when you’re watching Manos, you’re essentially watching a terrible home movie made even worse by bad dubbing.  The movie is so awful that at its big premier in El Paso, the cast and crew sneaked out of the theater in humiliation as the audience laughed its collective ass off.

Manos was soon forgotten and seemed destined to slip into obscurity . . . which it probably would have, if a copy hadn’t somehow fallen into the hands of the writers at Mystery Science Theater 3000 in 1993.  MST3K’s treatment of Manos is widely considered one of the show’s greatest episodes and the film has since become a cult classic.  If you plan on watching it, remember one thing: this movie is bad.  Very, very bad.  Personally, I can’t watch Manos on its own without Joel and the Bots from MST3K to help me through it.  But if you’re a brave soul with a lot of patience, Manos is available in its pure, non-riffed form.

THE MONEY SHOT: The family meets Torgo for the first time.  Torgo’s cloven feet make their first appearance at 3:31 (as does his haunting musical theme).

Duane seems like a nice guy, but he has a terrible secret that he carries around with him in a little basket.  That terrible secret is his deformed, formerly-attached Siamese twin brother, Belial.  The two are on a mission to exact revenge upon the doctor who separated them, but when Duane starts falling in love with a cute girl, Belial gets jealous.

Basket Case is a glorious mess of hand-puppets, stop-motion, bad acting and big hair.  When it comes to schlocky movies about attaching/detaching human beings to create monstrous freaks, I’ll take this over The Human Centipede any day.

THE MONEY SHOT:  Not the best scene in the movie, but the best I can find on YouTube. 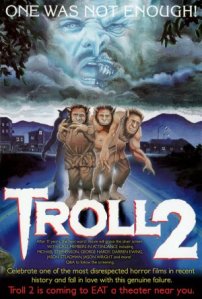 I’m not sure that I’ve ever seen the original Troll (I tend to get it confused with Leprechaun for some reason), but that doesn’t matter since Troll 2 is related to the first movie in name only; its working title was Goblins, but the studio didn’t think it was strong enough to survive on its own, so they hastily attached it to the Troll franchise hoping that would somehow make it successful.  It didn’t.

Much like Manos, Troll 2 follows a family that takes an ill-fated vacation — in this case, to the town of Nilbog, because apparently no one in this family is capable of reading simple English words backwards.  As you might expect, the quiet town of Nilbog is infested with goblins, but the good news is that they’re vegetarian goblins.  The bad news is that they’re intent on turning people into plants.

THE MONEY SHOT:  Picking the best moment in Troll 2 is like picking a favorite ice cream flavor, but this is probably the most famous scene in the movie. 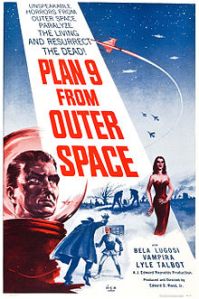 This is widely considered the worst movie ever made; the Citizen Kane of bad movies, if you will.  Plan 9 from Outer Space was written and directed by the notorious Ed Wood — a man you could appropriately call the Orson Welles of terrible directors.  Bela Lugosi is the most famous actor in the film — or he would have been if he hadn’t died shortly before production began.  Instead of re-casting Lugosi’s role, Wood convinced his own chiropractor to don a black cape and walk around with his face partially covered; that was edited alongside some home movies featuring Lugosi that Wood had laying around, and the result was that the director could say his film technically “starred” Bela Lugosi.  Other actors include ‘50s TV show hostess Vampira, Swedish pro wrestler Tor Johnson, and a guy called Dudley Manlove (why he didn’t go into porn with that name, I have no idea).

The plot is pretty neatly summed up by the movie’s original title: Grave Robbers from Outer Space.

THE MONEY SHOT:  Too many to choose from.  Here’s a compilation.

A small town is terrorized by three alien entities — one looks like Swamp Thing, one looks like Bigfoot with bad knees, and the last one looks like a semi-transparent Play-Doh dragon.  A mysterious gentleman with a heart as big as his ‘70s mustache shows up to save the day.  And everyone has terrible hair and excessively oily skin.

Apparently, this movie was a late-night staple on Ted Turner’s cable superstations in the ‘80s and ‘90s, meaning that you might have caught part of it one night when you were too sleepy/drunk to get off the couch and look for the remote (which is probably how most people were exposed to movies like this back in the day).  In more recent years, The Alien Factor earned some notoriety when it was riffed on Cinematic Titanic (a MST3K spinoff by creator Joel Hodgeson).

THE MONEY SHOT:  So believe it or not, it’s hard to find individual clips of this movie on YouTube (although the movie itself is on there in its entirety), so here’s a fan-made trailer that someone put together.

And there you go; if you can’t handle legitimately scary movies this Halloween (or if you’re just bored with them), there are plenty of terrible ones you can turn to for a good giggle.  Netflix, Hulu and YouTube are loaded with them.  Until next time, I leave you with this bit of glorious awfulness from Shark Attack 3: Megalodon.  Happy Halloween!

One thought on “Five Awful Horror Movies Everyone Should See”