I wasn’t sure how to write notes on the thin slips of “Guest Check” paper I borrowed from the counter of Slim’s, but I pulled apart the sheets and took notes of the unruly musicians anyway. My boyfriend and I had found the only decorous corner of the bar and were on stools while he hungrily awaited his burger. Slim’s is categorized as a St. John’s dive bar, but I always think that Portlanders use the term “dive” too liberally. (Is the bathroom unremarkable? Are the table tops wiped down? Does the bar offer microbrews? And, most telling of all, what are the looks of the clientele? Haggard? Wastoid? Ironically tousled? Slim’s is a cozy in-between of all these criteria and not, in my book, a dive.)

The crowd at Slim’s this night of Halloween weekend seemed wizened (read: drunk). While we rode our bikes down Lombard on streets black and slickened by constant mists, I wished very hard for music to encompass us both on our ride. I had been in my head for hours that day and the dark streets made me feel like I was still isolated.
We approached St. John’s. I heard “Heart of Gold” coming from someone’s parked van. I know the harmonica and the chorus, so I sang along as I rode my bike. Just another night in North Portland, a district that stretches westward from the dividing line of North Williams, north of the Rose Quarter, where the Portland Trail Blazers play: North Portland is basically a stubby peninsula that the Willamette River guards to the south until it curves northward to Kelly Point Park, where the river flows into the Columbia River.

While Northeast and Southeast Portland sprawl into Gresham and Clackamas County, hemmed in only to the west by the Willamette, North Portland consists of only a handful of neighborhoods—St. Johns, Portsmouth, Kenton, Overlook, Boise, the University of Portland. Meanwhile, half of the district is dedicated to the Smith and Bybee Wetlands, the Portland International Raceway, whose weekend drag races I would hear in the background while I puttered around in my backyard, and the Portland Meadows. 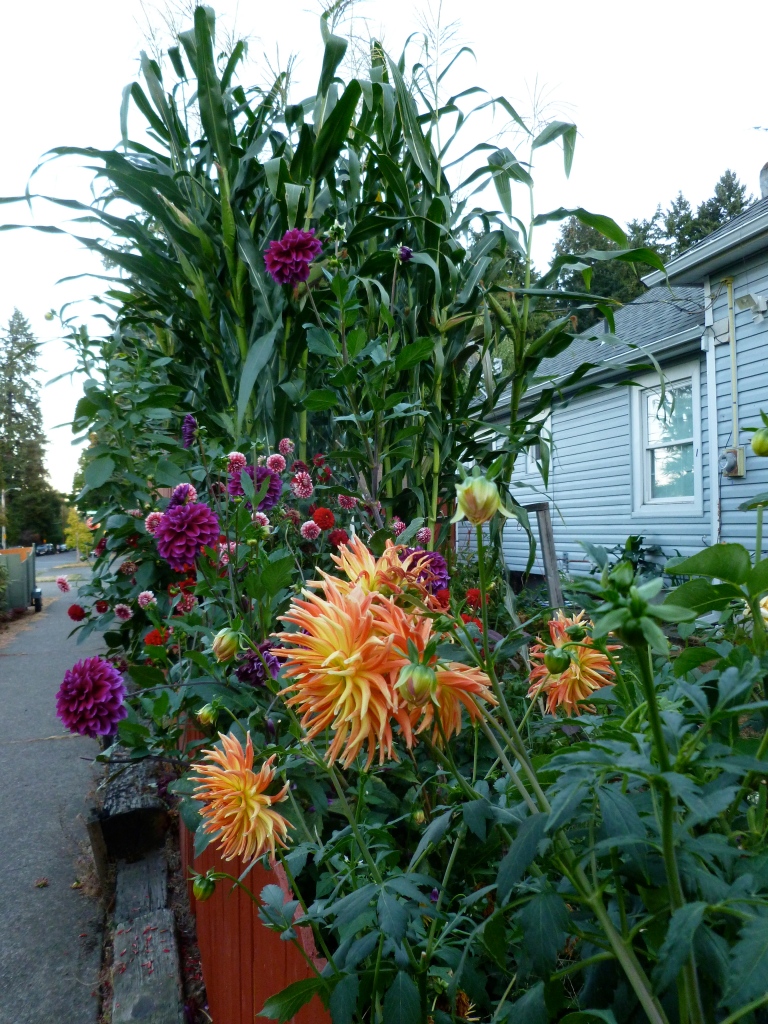 One thing that helps to keep the rent cheap, especially in my neighborhood, is the presence of a waste treatment facility about half a mile north of my house across Columbia Boulevard. While I’ve taken a few nice bike rides along the Columbia Slough, before I can get to the trail, I have to hop over the railroad tracks and not-breath through my nose for a few minutes until I’m upwind of the facility. It’s the juxtaposition of peace and industrial that keeps me fascinated by this nook of Portland: Train whistles that wake us, watching moonrises over the St. John’s Bridge, cheering on horses named Stormy Tina, Mr. Easy Okie, or Little Town Flirt, friendly kitties that follow you on your walk home from Kenton, communing at bars not-divey-enough for hipster, watching crows congregate at nightfall in Columbia Park’s tall pines.

Over the next few months, I want to sniff around the neighborhood a bit more because even this description is only the outline of endless stories.

Mary Breaden lives and writes in Portland, Oregon, where after work she can often be found gardening or stitching feminist sentiments into fabric. She co-manages Visitant, an experimental literary outlet. Mary’s work has been published or is forthcoming in Bennington Review, Vol. 1 Brooklyn, and Joyland, among others. Follow her @MaryBreaden for biking horror stories, writing craft thoughts, and rants about her cat.
Loading Comments...
Comment
×
%d bloggers like this: