When I came across the Dead Feminists Series over the holidays, it was in an echoing room in the Oregon Convention Center for Portland’s Crafty Wonderland holiday fair. The table showcasing the work of Anagram Press and Springtide Press, owned by Tacoma-based Chandler O’Leary and Jessica Spring (respectively), was overrun with craft-loving customers, so I browsed to the side and found the Dead Feminists.

As you can see by this particular broadside (a 10″ x 18″ letterpress print), the amount of detail (and color selection) is both charming and well-balanced. While what will become the broadside is drawn by hand by Chandler, she and Jessica work closely to select the featured feminist and Jessica researches and writes the colophon at the bottom of the print (providing a biography of the feminist and his or her contributions).

According to Jessica, the idea for a Dead Feminist Series originated from the turmoil of the 2008 election cycle. “I had found a quote by Elizabeth Cady Stanton about conservatives which called for an illustration of glasses inspired by a certain lady VP candidate [“Come, come, my conservative friend, wipe the dew off your spectacles and see the world is moving.”] Chandler took up the challenge to draw them, but went much further and drew the whole quote. I was thrilled and once we set out to print we realized it would be easy enough to make it two color. The prints sold incredibly fast, and the series was born.” Typically, the two women put out a broadside every quarter; this, of course, in addition to the heaps of other projects they are working on. (To get a sense of their industriousness, visit their websites, or Chandler’s blog, that details some of their adventures.)

“We have some rules for the series,” Jessica said. “The women we feature have to be dead, and we really avoid quotes that are simply focusing on how women can do what men can. We make a real effort to find a variety of voices and races, and to pull together a mix of famous, infamous, and should-be-known women.”

Judging by Jessica and Chandler’s swarmed tables at Crafty Wonderland, I could ascertain that the Dead Feminists Series–its lovely designs and impeccable print quality–had resonated with others. In addition to this, though, the series is a response to the political circus of the last four years.

Chandler said: “The popularity of the series has been a complete surprise; this sort of reaction doesn’t seem to be typical in the world of letterpress broadsides. I think it has something to do with the timely nature of each piece, and how history can still strike a chord with how people feel about current events. Many of the prints in the series have sold out in a matter of days; some in a matter of hours.”

Regarding the selection process for featured feminists in this series, Chandler said that she and Jessica sometimes select a feminist as a sort of response to a specific event, “like the Gulf Coast oil spill (for “Drill, Baby, Drill”), or the passage of Prop 8 in California (for “Prop Cake”). . .We make a real effort to connect current events to these historical figures because their words are still so relevant and can provide inspiration, even guidance. Our country has been through some real turbulence since we started these broadsides, and there doesn’t seem to be a shortage of challenging topics to address.”

Some other Dead Feminists include Congresswoman Shirley Chisholm (shown below), who made a bid for president in 1972, Benjamin Franklin and (his sister) Jane Mecom, Eleanor Roosevelt, Virginia Woolf, and Gwendolyn Brooks. 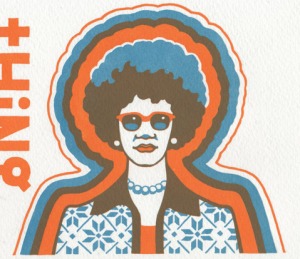 The featured feminists are deeply researched, as shown within the details of the broadside. For instance, the Emma Goldman broadside (at the top of this post) featured a colorful assortment of matryoshka, as well as a Goldman quote regarding the individual’s right to love. Regardless of how well-versed you are in history, you can recognize the subtle connection between the quotation and the image.

According to Chandler, both she and Jessica are very much influenced by history and they are interested in seeing the interplay between those and current events. “I carry a sketchbook with me everywhere I go,” Chandler says. “. . .And [I] am constantly drawing the things I see around me.”

Regarding the next Dead Feminist due out in the next month or so, Chandler hinted that she and Jessica would “step into controversial waters.”

Until then, you can find your favorite Dead Feminist on Etsy. For more gorgeous art from these women, please visit Anagram Press or Springtide Press.

Mary Breaden lives and writes in Portland, Oregon, where after work she can often be found gardening or stitching feminist sentiments into fabric. She co-manages Visitant, an experimental literary outlet. Mary’s work has been published or is forthcoming in Bennington Review, Vol. 1 Brooklyn, and Joyland, among others. Follow her @MaryBreaden for biking horror stories, writing craft thoughts, and rants about her cat.
%d bloggers like this: