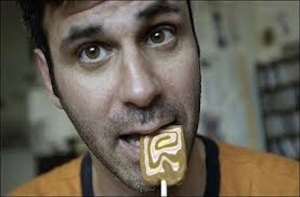 Steve Almond is the author of ten books of fiction and nonfiction, including the most recent story collection God Bless America. He is also a regular contributor to The Rumpus, where you can read his essay “Why I Write Smut: A Manifesto.” I first came across his writing in Tin House’s essay collection on the craft of writing, The Writer’s Notebook. Almond’s essay, “Hard up for a Hard on,” explores how to incorporate sex into a story. To start, he suggests first writing the most awful, over-the-top sex scene you can imagine, just to get it out of your system. He argues that “if you remove the pressure for the sex to be good, it frees you up to write about what really matters, which is the way sex reveals character.”

In this interview, he offers more great advice for those writers interested in writing about sex. And if this piques your interest, you can buy his limited-edition Writs of Passion, a set of six volumes of “adult-themed” content. You can buy one of the few remaining copies here.

What does it take to write sex well?
You just have to be brutally honest and to pay attention to everything that’s happening in the room, by which I mean not just what the bodies are doing, but how the minds and hearts are reacting to these exertions. People get so self-conscious about sex, and this tends to make writers either avoid the whole subject, or dress it up in language.

What do you think is the sexiest word in the English language?
Climax.

What do you think is the dirtiest?
Suck.

Have you ever drawn on your real life when writing about sex? If so, did you get caught (as in the person who shared the sexual encounter with you realized you were writing about them)?
Uh, yeah. And yeah. A couple of times. And both times it was rough. I changed all the details, but the people in question recognized themselves and they felt betrayed, understandably.

What’s the sexiest book you’ve ever read?
The Lover by Duras is smoking. But I absolutely love the sex scenes in The Visit of the Royal Physician by Per Olov Enqvist.

Do you think men and women write about sex differently?
Yeah, probably. I recently compiled my 20 favorite sex scenes and the ones written by women were actually more focused on the mind and heart, and the men’s more on the body. Not exactly a shocker.

What does sex add to a story?
I don’t really look at it like that. The purpose of a sex scene is the same as any other scene: to lay your characters bare on the page–emotionally and psychologically. They just happen to be physically naked most of the time.

What kind of response did you receive when you released Writs of Passion. Are you working on a follow-up?
I intended Writs of Passion to be a pretty limited thing–only printed a couple hundred editions. I sold a bunch before Valentine’s, but it’s really a small scale thing. I hope folks have been enjoying them, though I suspect a few of the stories are much darker than people might have been anticipating. Which is how sex is sometimes, right? Anyway, there are six Writs, which feels like a lot. So no follow-up for now.

What advice do you have for writers who want to incorporate sex into their short story/book/essay?
If you’re not prepared to write about sex as it exists in the real world–as an intensely emotional event–then don’t.