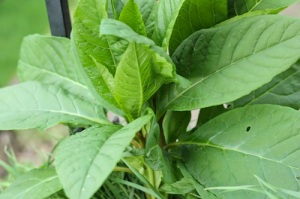 Poke (pokeweed, pokeberry) is a poisonous plant, yet a popular wild food. This native North American perennial contains phytolaccatoxin and phytolaccigenin, which can cause symptoms ranging in severity from vomiting and diarrhea to seizures and difficulty breathing, sometimes death. The poisons are most concentrated in the root, which is never eaten, but can be cooked out of the leaves by twice boiling with a change of water. This process may sound like an insurmountable bother, but it’s really not so much work once you get the rhythm down.

I ate poke for the first time last week and maybe for the only time this year. As the plants age, they become more poisonous. One source I read said that poke is safe until the stalk is 18 inches, another said a foot, another said only six inches. I waited too long in the season and couldn’t find any shoots shorter than a foot, so I decided a foot was a perfectly wise limit. I stripped the leaves off the stalk, set a pot of water to boil, and started the teakettle. I dropped the leaves into the pot and boiled them limp, probably about five minutes. Then I strained the flaccid greens, rinsed them with cold water (cold because I wanted to be able to pick up the wad of leaves with my hand), tossed them back into the empty pot, poured steaming water from the tea kettle over the leaves (so that I wouldn’t have to heat fresh water), and boiled the them for a couple more minutes, before draining and rinsing one final time. If you have the hot water ready, like I did in the teakettle, it really doesn’t take too much extra time to do the second boiling.

I enjoyed poke. It was an extremely mild vegetable, but somehow not bland. I don’t even know how that makes sense, that something could have not much of a flavor but also not be bland. I put the greens on top of spaghetti with tomato sauce. Pretty delicious and totally worth the zero dollars I paid for it.

As I kid I played with the deep purple berries of the poke plant, smashing them up into ink. (It is rumored that pokeberry ink was used to write the Declaration of Independence, but this is not true.) I never imagined poke could be edible. This plant looks poisonous. Its stem turns a glossy red as it matures. Glossy red plants look dangerous. They just do. Like poison ivy in the fall. What about rhubarb, you may ask? Totally looks evil to me. I would never have eaten rhubarb if I hadn’t seen everyone else do it and survive. As it turns out, my childhood self had good reason to be uneasy, but adult me knows how to boil water and cook my own damn food.