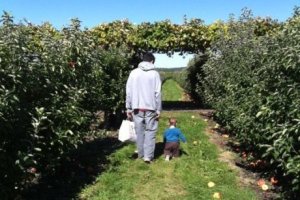 I spend a lot of time blaming my husband for things. Leaving his dirty socks in the middle of the floor, caking the bathroom with sticky film, letting our son stay up too late, plopping our daughter in front of too much TV. I blame him when he travels for work, when I feel spent, when I come home from a one-hour errand to a house erupting with plastic toys, to milk dripping down the sides of the counter, peanut butter smeared in the door jamb. And on the rug. And on the baby.

I had a moment the other day when this all dawned on me, how much I blame him. I was holding both kids and we were waiting for the slide at an indoor playground near our house. He was standing on the other side of the gym, talking with some other dads. Our baby was wailing — she had just fallen, burning her face on the “indoor grass.” Our 3-year-old wanted to go down the slide again, again, again.

My husband stood to the side, seemingly oblivious, chatting away, and when I looked over, he didn’t even register the tumult. In my head I said Really?! You can’t tell when it’s your own baby crying?! You can’t hear that? I sighed a frustrated sigh and looked over at another mother, knee-deep in toddlers. She looked at me, gave an exaggerated eye-roll and said, “Yeah, they really don’t get it, do they?”

Which made me stop and think.

On our way home that day, after wrangling babies into car seats and slamming the car doors a little too hard, I sat, fuming in the passenger seat.

I didn’t want to be the stereotypical wife. The typical me. But I couldn’t help it.

“Did you not hear the crying? Why didn’t you help me?”

He sighed. “I saw. I heard. You looked like you were handling it.”

I rolled my eyes, and stayed annoyed, but when we got home, he scooped up both kids and took them inside. He said, “Why don’t you take a nap. Or a shower. Or a walk. Or all three.” He wasn’t accusatory about it. He wasn’t annoyed at me. He just got it.

The truth is, he gets it a lot of the time. And though we are good at very different things — he reacts, I plan, he makes a fort, I make lasagna — I think it is that difference that makes things work, at least most of the time.

A long time ago, before the little monsters ran wild on our hearts, before our bodies dragged and sagged just a little, before our days ended with an exhausted crash into the pillows of an unmade bed, we were different.

We took road trips in rented convertibles, we spent our last three dollars on an In-N-Out burger to share. We slurped smoothies on boardwalks and only wore flip-flops. We raced around underground, coming up for air at different Brooklyn bars, hands fumbling for the cigarettes that were no longer allowed inside. We wrote things down. We lost people. We joined our bank accounts, we approached corporate ladders, we got kittens. We fumbled around in the night and had one little monster. We fumbled around in the night even more, bumping into each other and other sharp things to try to quiet the howl. The howler is now almost 4 years old. We sprinted towards family, had the second little monster; she slept a little better. Eighteen months later, we are still so tired.

And as we have tried to understand the uniqueness of the most universal experience, we have learned a lot about each other. About how we are different — and those differences sometimes become the fodder for frustration and blame in our parenting. Especially for me.

But something occurred to me when I took a walk and then a shower and then a nap. Maybe it is more than just the balance of the difference that makes it work.

We expect that our children will grow to resemble us, in looks and in actions. Our son has my husband’s soul, our daughter has my spirit; they both have his eyes. But I never expected to grow to resemble him. Or him me. And it is this change that is the most surprising of all.

He walks slower now. He breathes in and out, all the way. He loves to read until he tumbles to sleep. He looks at mistakes our children make as the best opportunities to teach them something, to learn something himself.

I like to camp on the beach now and I don’t even mind the mosquitoes. I can take risks that involve tumbling. I walk faster. My frenzied worry is all but gone; deflated, like a weathered balloon, shriveled into a corner, all red and soft and unassuming.

We are in this together, this parenting thing. It’s the biggest thing we have and the thing we are least trained for. My husband is the only person who knows our kids like I know our kids and he is the only person who has the exact same amount of responsibility for and to them as I do. We might not look at parenting the same, or treat it the same way all the time. I might seethe as he stands on the sidelines, he might roll his eyes at my exaggerated desperation. We might, if left on our own, parent in a tornado of worry, or from under a pile of dirty socks. But it is in that difference that we grow. And it is from that difference that I become a better version of myself; I become a better mother.

Cesca is a leadership consultant who splits her professional time between schools and corporations, coaching leaders in negotiation and the skills of effective leadership. She has started three successful companies (one a non-profit for women artists) and her leadership advice is sought after internationally. She is also a rock-singing, scar-jewelery making, sometimes stay-at-home mom with a killer husband whose patience with her is positively endless.
%d bloggers like this: