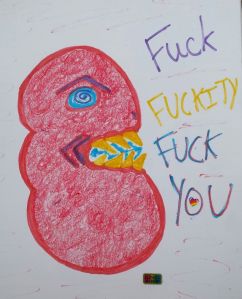 Hello, PDXX Collective readers, it’s been a while since I last posted.

A month ago I spilled wine all over my laptop the night before a presentation. It’s a good thing I had my talk backed up in the cloud, otherwise it would have just been 45 minutes of me sobbing. So I had no computer with which to write and publish my PDXX post.

I woke up around 3am on a Sunday morning feeling like there was hot pepper up my urethra and I had to pee it out immediately. But my first trip to the bathroom didn’t get all the hot pepper out. Neither did the second. The third time, I brought my phone and camped out playing bejeweled. I knocked back 800mg (4 pills) of ibuprofen and a couple garlic pills (antibacterial). Usually, I try not to drink a lot of water at night so I don’t have to get up to pee. Now I wanted to pee as much as I could, to rid myself of the infection. I wasn’t able to return to sleep for an hour, when the pain killers kicked in.

During the night and the next day, I drank so much water that my UTI symptoms mostly improved. At the doctor’s office, my urine analysis turned up clean. I warned the technician that I had drank so much water that I wasn’t sure anything would turn up in the UA, but she assured me it would. I kept drinking water like a race horse that would pee a lot, but on Tuesday night it came back with a vengeance and what it brought along with it was worse. I was wandering around Fred Meyer looking for cranberry juice, cranberry pills, and that stuff that makes your pee hole not hurt anymore and turns your piss brownish orange and funny smelling. I broke into a sweat, my bottom innards churning in a fiery mass. I abandoned my cart and scooted to the bathroom. Now I had the shits. The internet assured me that this was probably caused by the UTI making my other organs angry and wasn’t the sign of something worse.

The weird piss analgesic did nothing for me. It was another night of poor sleep.

On Wednesday I went back to the doctor, my UA was definitely not normal. I got sent home with nitrofurantoin (Macrobid), an antibiotic with scary warnings in all caps like “THIS MEDICINE MAY RARELY CAUSE SEVERE AND SOMETIMES FATAL NERVE PROBLEMS” (also fatal lung and liver problems). The antibiotics were just in time. Early Friday morning I was heading out to SOAK, Oregon’s regional Burning Man in Tidewater Oregon. For four days I would be no running water, no comfy bed to roll around in pain on, and only portapotties frequented by those that were drunk or frying on drugs with loose bowels. I wouldn’t be able to go unless my UTI improved. Wednesday night I lay in bed suffering intestinal and crotch discomfort. Even my ankles and feet hurt.

But Thursday morning I felt well enough to go. After we we set up camp, I took it easy in my tent, ignoring the dubstep and drunk people outside. I wanted to participate, but my body felt wrong. My body knew that its internal organs were pissed and my hands and feet hurt.

On Friday I was ready to party, but I had joint pain.There was a pattern emerging. My hands and feet would begin to hurt about 30 minutes after taking the antibiotics, then sometimes the pain would spread to my elbows, knees, or shoulders. I’m sure I didn’t help my health problems by boozing and running amok, climbing around a giant crocheted playground in tutus and boots. The pain in my joints became unbearable. I laid down next to our campfire feverish and shivering. We called a SOAK medic to take my temperature. I wanted to sleep it off. I’m glad they didn’t send me home. I was sure I was having a terrible allergy to the antibiotics. I’ll never know exactly whether this was a reaction to the antibiotics or something more insidious settling in.

I stopped taking the pills and called my doctor’s office to have a new prescription waiting for me back in civilization. I wouldn’t be able to get the second antibiotic until business hours on Monday. The advice nurse described the symptoms of sepsis to me. She told me bacteria culture from my UTI had shown that it was only moderately susceptible to the nitrofurantoin I had been prescribed. Three days of the the antibiotic might not have been enough to kill the infection. It might spread to my kidneys and then I would be in trouble out in the woods. I would have to go to the emergency room.

I stayed sober for the rest of the festival. The joint pain in my hands and feet lingered for two more days, easing gradually. I got my new antibiotic on Monday evening, an antibiotic I had taken for a UTI several years before without significant side effects. I felt healthy again. I assumed my troubles were over, but the worst was still to come.

I took my second dose of the antibiotic around noon on Tuesday. I had some nausea and cramping, but that sort of side effect is common. I went to bed for my lunch hour. (I work from home.) It just got worse. My kidney felt like it was in a stew bubbling, toiling trouble. Inflamed. I was bloated in my left area over my kidney. That’s what made me realize something was very wrong. When I leaned back SOMETHING hurt. I knew exactly where my left kidney was. I had never felt my kidney before, but I could tell exactly where it was and how big it was. I cried to my boyfriend, Eric, over Gchat. He came over and I deteriorated. He contacted work for me to tell them I was too sick to work. He was the one who called for an appointment only to find out I would have to wait for urgent care to open in five hours.

Even though I was in agony, I was afraid to take pain killers. I was worried about my kidney. I didn’t want to stress it out in case I was going to have kidney failure. I squirmed around in my bed, bending and unbending my legs, trying to get away from the source of the pain.

I had a fever that was 100.4 degrees. Not very much but that’s what the nurse told me counted as a fever these days. I hardly ever get above 99 degrees. I’m adult. I don’t get really high fevers anymore. I remember having a fever of 104 when I was a kid and trying to melt a Barbie on my head. Eric tried to get me to drink water. It was difficult to drink water. I was nauseous. I couldn’t sit up without pain. I couldn’t eat. I wasn’t hungry. I had hunger pains but I didn’t want food. I was food adverse.

I don’t remember the rest of the day very well. I remember Eric saying my room was hot, but I was cold. Eric took me to urgent care by Car2Go. (We don’t own a car.) On the way there I repeated “help me” or “ok ok” over and over. For some reason that sort of chanting helps me with pain. It was the second worse pain I had ever felt. The only worse pain was a weird full-torso spasm I once had that cut off my breathing and put me in the emergency room. I imagined that I was in labor and my body was going to spit out my diseased kidney through my urethra. I wept in urgent care and other patients brought me tissues. Eric pushed me back and forth in a wheelchair from the waiting room, exam room, and lab.

They gave me IV saline and an antibiotics and an anti-inflammatory pain killer. Then I was lucid again. Eric drove me home and fed me chunks of cold watermelon.

It took me a little more than a week to recover fully. I slept a lot, 12 hours for the first few nights. The doctor was nice enough to give me percocet and something for the nausea but I didn’t take either. I had a headache that tylenol and ibuprofen couldn’t get rid of. The percocet would have, but it would have made my nausea worse. The antinausea medication would have taken are of the upset stomach but has headaches as a side effect. It was during a heat wave, and most houses in Portland, including mine, don’t have air conditioning. I spread out a tarp and camping pad in the dusty basement and watched Sailor Moon on Hulu. I was officially cured when I was able to bike again, when lifting up my knees no longer pissed off my inflamed left kidney.

The moral of this story is that sex can kill you. Clearly. Don’t do it.

One thought on “My Angry Kidney”