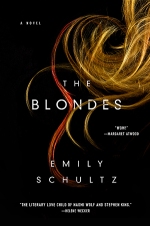 Gentlemen may prefer blondes, but at what cost to the rest of the world?

As soon as I heard about the premise of Emily Schultz’s novel, The Blondes (April 2015, St. Martin’s Press), I knew I had to read it. In this speculative fiction, a pandemic that turns blonde women into murderous fiends has crippled the planet. While the U.S. searches blindly for a cure, public health officials take drastic measures to contain the illness through forced quarantines of all blondes, and even redheads (who are thought to be more at risk for infection).

The novel is told from the point of view of Hazel Hayes, a graduate student in aesthetology—the invented “study of looking”—who has recently been impregnated by her married professor. At the start of the novel, Hazel is at work on her thesis, “Through a Screen Darkly: Vamps, Tramps, and False Consciousness in Female-Marketed Culture.” (The dry skewering of academia in this novel is delightful.) Hazel witnesses her first “blonde attack” in the New York subway, a gruesome scene that for days after reading it made me uneasy about waiting on subway platforms. As the attacks become worse and worse, and after Hazel discovers her pregnancy, she attempts to flee the U.S. to return to her home country of Canada.

While the father of the child, cowboy culture-obsessed Professor Karl Mann, is largely absent from the novel, Hazel ends up seeking shelter with Karl’s wife, Grace, during the epidemic. Out of boredom and loneliness, Hazel begins talking to her unborn child when Grace goes missing, and so the entire novel carries an oddly maternal overtone in the midst of the violent brutality of the pandemic.

Emily Schultz will be reading from The Blondes this Thursday at 7:30 p.m. at Powell’s—swing by and see her in person! But until then, here are a few questions about the novel and her writing process that Emily was kind enough to answer.

One thing that I admired about The Blondes was the humor that you used to treat a demonization of women. How did you maintain that humorous tone in this story’s all-too-familiar misogyny?

Peter Sellers had a great quote where he said: “Some forms of reality are so horrible we refuse to face them, unless we are trapped into it by comedy.” As I was writing it, humor seemed to the way to work in those realities without getting didactic and absurdity really served the story anytime I ran into a problem.

The novel’s narrator, Hazel Hayes, has her awkward and flawed moments, as well as moments of great bravery. I wondered why you decided to tell this story through the vehicle of Hazel.

I do think Hazel is tremendously flawed, but also when I think about it the only characters I’m really interested in are complex and imperfect. She’s also 25. I’m not anymore, but 25 is such a perfect median between the last moments of adolescence and adult realities, so to put that person into a worldwide calamity makes for a realistic situation. I don’t like simple heroism because I don’t think it exists.

I was interested in the atypical romantic story line that you chose for this story. At what point did you decide to make the father of the narrator’s child removed from the picture and why did you decide that?

I wanted the story to stay with Hazel and as I wrote it I realized this was a book of mostly female characters. Karl is marginalized as a character, but he is also marginal in Hazel’s life. If she hadn’t become pregnant, he might not have been that important in the long run. Hazel winds up in the cabin with Karl’s wife, and that is a more interesting dynamic really, for someone who had an affair to then have to go as the other woman to her for help.

I don’t like simple heroism because I don’t think it exists.

Beyond the sheer entertainment of reading this novel, is there any take-away that you would like readers to get from it?

There’s a lot here to take away, but that’s up to each reader. One thing I’m really surprised by is the different takes on this book. Some people find it more horrific than I think it is, others find it funnier, and still others have had an intense emotional reaction to the treatment of women in the book.

What was your favorite part of writing this book?

My favorite part was putting Hazel into quarantine—because it’s a self-contained world and so intense. It was also a surprise to me because I knew Hazel needed an 8-month timeline to correspond with her pregnancy but wasn’t sure where Hazel was going to spend all that time.

Be sure to stop by Powell’s on Thursday and see Emily read from The Blondes!

Emily Schultz is the co-founder of Joyland Magazine, host of the podcast Truth & Fiction, and creator of the blog Spending the Stephen King Money. Schultz’s newest novel, The Blondes, is forthcoming in the U.S. for spring 2015 from St. Martin’s Press. Her writing has appeared in Elle, Bustle, The Walrus, Black Warrior Review, The Fanzine, At Length, Animal, and Prairie Schooner. She lives in Brooklyn and is a producer with the indie media company Heroic Collective.

Mary Breaden lives and writes in Portland, Oregon, where after work she can often be found gardening or stitching feminist sentiments into fabric. She co-manages Visitant, an experimental literary outlet. Mary’s work has been published or is forthcoming in Bennington Review, Vol. 1 Brooklyn, and Joyland, among others. Follow her @MaryBreaden for biking horror stories, writing craft thoughts, and rants about her cat.
Loading Comments...
Comment
×
%d bloggers like this: