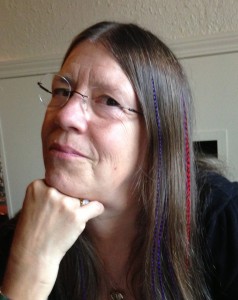 Tricia Knoll is a Portand poet, retired from many years of communication work for the City of Portland. She has degrees in literature from Stanford University (BA) and Yale University (MAT). Her poetry and haiku appear in numerous journals and several anthologies. Her chapbook Urban Wild looks at human and wildlife interactions, mostly within the Portland city limits. Her forthcoming book, Ocean’s Laughter  (Aldrich Press, December 2015), is a series of lyric and eco-poetry about Manzanita, Oregon.

She claimed her future chose her as a child. How triple garage doors
across from her home went up and down, up and down, breaking
the strict facade of that one-story yellow brick building.
Sleek black hearses entered, left at all hours,
with black windows and gray drapes.
Little else moved to draw her child’s eye.

I stopped taking notes when she said she had invited her friends
to bring over Barbie dolls. She played funeral director,
helping them wash, dress, lay out the Barbies and Kens
in shoe boxes. She made the girls pretend-tea to ease the choices
about casket liners. She growled whines of garage doors.

As an adult, she was pretty. Blonde. This young woman
in her expensive gray suit and white silk blouse.
She was proud of having climbed the rungs
of the management ladder
of a national funeral corporation
in low heeled pumps.
She thanked feminists for opportunities
for roles beyond washing and anointing bodies
and that Civil War trade of embalming
women learned on battlefields.

I think of her sometimes.
My Barbies rode horseback.
A foreign exchange student from Kenya told me
his biggest surprise about America
was that not only did most people have a house,
the cars had houses too. How fast
the doors opened and shut.

One thought on “A Freelancer’s Interview With A Woman of Industry, 1982”

An Vermont poet with a deep love for writing haiku, poetry with feminist and eco themes. Ocean's Laughter (Aldrich Press 2016) combines lyric and eco-poetry to look at change over time in a small town on Oregon's north coast. Urban Wild (a chapbook from Finishing Line Press, 2014) highlights how people and wildlife interact in urban habitat. Broadfork Farm (The Poetry Box) is love poetry for a the creatures and people of a small organic farm in Trout Lake, Washington. In 2018 Antrim House released How I Learned To Be White -- the poetry of introspection into white privilege and Knoll's work to live more fully in a multicultural world. How I Learned To Be White received the Gold Prize for Poetry Book Category for Motivational Poetry in the Human Relations Indie Book Prize for 2018. Website: triciaknoll.com
%d bloggers like this: