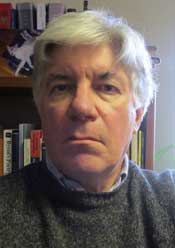 William Doreski teaches writing and literature at Keene State College in New Hampshire. His work has appeared in various online and print journals and in several collections, most recently, The Suburbs of Atlantis (AA Press, 2013).

The first cold morning in September crawls from the ditch, wanders downtown, and sprawls at my feet, sighing. Ugly children saunter past, waving their limbs like jellyfish in the harbor. I watch them trail after angry parents and wonder why evolution bothered with us. Maybe Darwin could say, or maybe he would duck the question. Marx might prefer an economic basis for my morning angst. Carlyle would examine my shabby clothes and laugh. Ruskin would recommend better underpainting. Pater could empurple me in prose ripe enough to dull the edge. The nineteenth century sported big ideas, the twentieth century featured the technology of war, and the twenty-first promises to bury me so deep in the digital sublime I’ll never find myself. Now passes a family so overweight it looks like an iceberg. I want to humble myself before such awesome bulk, but who would understand? Geese prattle overhead, deforming a ragged V. I wish I had their confidence in flight, but their honking reminds me how impossible are communications in this era of data flow, how inflexible pronouns have become.

One thought on “Data Flow”