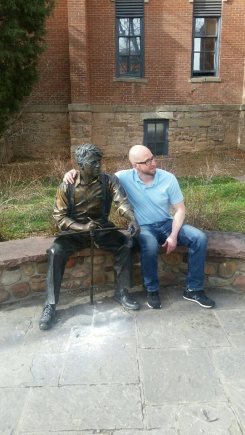 Jonathan Simkins lives in Denver’s RiNo district. He is the author with artist Justin Ankenbauer of the ekphrastic chapbook, Translucent Winds (Helikon Gallery & Studios, 2016). The title poem of his second chapbook, This Is The Crucible(LuNaMoPoLiS, 2017), was nominated for Best New Poets 2016. His poems have appeared in various publications, including Epigraph Magazine, Gingerbread House Literary Magazine, Literary Orphans, Requited Journal, and Wilderness House Literary Review, among others.

As the pendulum swings

Contemplated a unity waving in the wind

To the song, the wave that’s song
To the sea cave.

At the shore’s edge,

May light the candelabrum, sea foam
For the flower’s star green.

Where they wield the whirring flail
Water turns in the wheel
The inheritance of clouds.