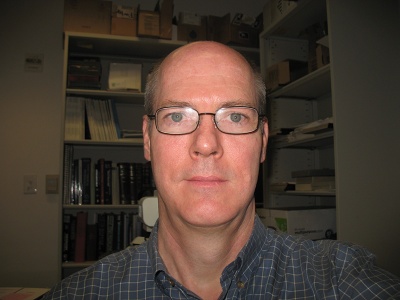 Brian Porter lives in College Station, Texas. “Henrietta” is an adapted excerpt from Long Road to Arcadia, his novel in progress. A previous excerpt of the novel was published in The Boiler.

Henrietta Kovar lived eight miles down Holloway Creek Road. Her trailer sat back in the woods, not quite level, the yard strewn with rusty appliances, concrete statuary, bags of aluminum cans, broken-down lawnmowers, and a moldy bathtub or two.

Stan and Russell pulled up just after lunch. Over the din of barking dogs, Russell said, “Doc, I sure hope your tetanus shots are up to date.”

They got out of the truck and approached warily, following a winding path through the junk. Stan knocked on the sagging screen door, and after a long wait, Henrietta waddled out, wearing a faded pink t-shirt, baggy green shorts, and tall rubber boots. She had thick eyelashes and bushy brown hair streaked with gray.

“Hello there,” Henrietta said, ignoring his outstretched hand, reaching instead for a can of insect repellent in a plastic crate near the door. “I’m afraid we’ve got a bit of a tick problem. You might need some of this.” She started applying it and disappeared in a cloud of spray.

Stan and Russell looked at each other and shrugged, deciding to take their chances.

They followed Henrietta across a carport, then down a shady path around the back of the trailer. The ground was soggy from recent rain, the air hot and steamy. Dog pens were set up randomly among the trees. Some had concrete floors, but most were dirt. Stan didn’t know how many German shorthaired pointers Henrietta had, but it sounded like no less than a hundred.

“I hope you brought plenty of vaccine,” Henrietta said. “I’ve got four litters of pups and some adults that need their annuals. I used to do all this myself, but I’ve got arthritis so bad I can’t hardly get going most days.”

In each pen they entered, they had to sidestep water puddles and piles of feces. Some of the dirt pens had deep pits, and more than once, they tripped over exposed tree roots. Henrietta provided a running commentary while they worked.

“This is Günter’s Ghost. We call him G.G. He’s out of Aldabella, sired by Baron von Wagenbach. I used to show his mother. He’s a jumper. That’s why I’ve got his pen covered. The rascal was jumping on top of his house, then out of the pen.”

One large pen they entered had three young males. “These are littermates I’ve held on to, but I’ve got one of them sold to a breeder in New Mexico. They’ll make good studs. They’re great grandsons of Durango, a littermate of Theodora, who won best of class at Westminster in ’97. I need a heartworm test and health certificate on Jupiter. He’s the lighter one there in the corner.”

The excited dogs ran around the pen, leaping up on Stan and Russell with muddy paws. Stan set his cooler containing vaccine, dewormer, syringes, and ice packs on the ground along the side of the pen. Russell caught Jupiter and held him while Stan kneeled to give him a quick physical exam. When he did so, he felt something soft on his knee.

“Jupiter’s got the look everybody wants right now,” Henrietta said. “See that slope to his shoulder? The broad chest? Those big nostrils? That’s what the judges like. Isn’t he a dreamboat?”

“He sure is,” Stan said, as he stood and shook the feces off his pant leg.

Russell held off the vein on Jupiter’s front limb. As Stan was bent over the dog, trying to draw a blood sample, one of the other dogs jumped on his back and started humping him. He felt the dog’s breath on his neck, drool running down his back.

“Poindexter, you stop that!” Henrietta said.

She grabbed the dog by his scruff and pulled him off. Jupiter lurched, pulling the needle out of the vein, and the leg started bleeding. Stan held off the vein with a cotton swab and waited, but the bleeding wouldn’t stop. He took off his glasses and wiped the sweat from his brow. While pulling more swabs out of his pocket, he heard an odd sound and looked to his right. Behind Henrietta, Poindexter had his leg raised and a stream of urine was flowing into the open cooler.

“Doesn’t Jupiter have the most beautiful eyes you’ve ever seen?” Henrietta said. “Almond-shaped is what the judges look for. Round eyes won’t do you any favors. And look at those feet. See how they’re webbed, and how the toes are arched? Aren’t they gorgeous?”

“Yes ma’am,” Stan said, hoping that Jupiter’s leg would stop bleeding. When it finally did, they managed to get the blood sample from his other leg.

By the time they’d vaccinated and dewormed all three dogs, and then thirty more, it was getting late and Stan’s patience was stretched thin. One dog had escaped the pen, and they had to hide a sedative tablet in a piece of cheese to get it recaptured. A couple of dogs growled at them and needed muzzling, and another cut its leg on a loose wire and needed sutures.

Tired and sweaty, Stan finally plodded back to the truck with his urine-soaked cooler, scratching a tick bite, dog barks ringing in his ears. He filled out Jupiter’s health certificate, then walked back to the trailer.

Henrietta was sitting on her carport with her boots off and her bunioned feet propped up, cradling a can of beer, looking entirely too pleased with herself.

“Thank you, Ms. Kovar,” Stan said, handing her the paperwork, eager to get back on the road.

Henrietta took the papers and laid them on a cluttered table nearby. “That wasn’t bad at all.” She took a gulp of beer, burped, and wiped her mouth on the back of her hand. “It went a whole lot better than usual.”