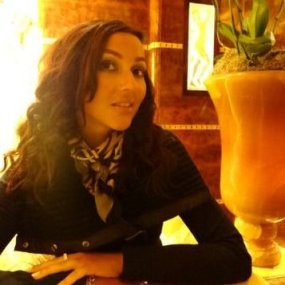 Tamara Lakomy is an archaeologist, specializing in the occult practices of indigenous people, herself of Berber Amazigh and Slavic descent. She runs a foundation that operates in East Africa, specializing in the cultural preservation of indigenous tribes, women’s rights and education, and advising foreign governments. She’s a priestess in training having embraced the Cult of the Mother Goddess. She’s an advocate for sustainable solutions to troubled regions and active in helping to solve major issues in regions needing development. She’s also an author in the Gothic Horror genre. Her debut novel, The Shadow Crucible, will be released in Spring 2017.

For the wanderer astray, the hermit seeking the lost books
To him the bitter path of knowledge is truly germane
And to gaze at the grand canvas of depravity, the deified crooks
All the depth of duplicity of the celestial rulers most profane

Hold a sieve to the eye of the sun, you cannot elude its glare
It sinks into your skin and bids all things grow within its stride
And as a tyrant most malevolent its deadly beams do stare
And from the true seers from sanity it does perniciously divide

The pendulum of madness swings, the crazed ones think the most
The veil has thinned in their eyes, the voices of beyond do call
And to the world of blissful living they have been reduced to a ghost
Accepting the imminence of civilization’s greatest downfall

The blackened cracks appear in the porcelain veneer so pure
No amount of purging shall restore, mend the outrage of awakening
For what was burned at the stakes beyond the fires did endure
As seeds sown in the subconscious of our future dawn breaking

It awoke from the heart of the wild, it waited for the propitious decline
It screamed into the echoing womb the words of regeneration
For the old legends seldom die nor do the ramparts of ancient truths resign
From burgeoning from its wintry spell into a new age vindication.

One thought on “Sun”