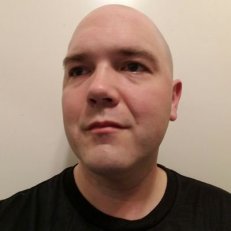 As an avid reader and prolific writer since elementary school, Kevin Potter always knew he’d be an author. He wrote his first short story, about a magical pair of shoes, at the age of 9 and has been working at it since. After spending many years on different business ventures, he has finally returned to his first love: writing. Kevin is currently finalizing the prequel novella to what promises to be a lengthy epic/dark fantasy series entitled “The Calamity.”

Below is Part 1 of 3  installments for Visitant.

Falling. It felt as if I’d been falling forever. I had the strangest sense of surrealism, but the terror was real. The chaotic, swirling wind that beat at my face was real. The palpable darkness of the shaft I tumbled down was real. The unfathomable depths to which I had fallen were undeniably real. Yet, I felt as if I had done it all before.

Although it was pitch black, I sensed I was in a narrow space. A space so narrow, I could touch the edges of the narrow pit if I stretched my arms and legs out. I could stop myself. Or destroy myself.

But I didn’t try. Deep inside, I thought making the attempt would only make things worse.

From what seemed like below me, I couldn’t be certain, I watched as a light became visible. After a few more minutes, I saw an ambient orange glow, as from a steady fire, yet without the faintest hint of a flicker. I saw no flame and felt no heat.

In fact, I felt cold. Over and above the cold of the wind from the speed of my descent, it was cold. Colder than anything I had ever felt.

Soon, the tunnel opened into a wide area and the speed of my descent slowed to that of a feather. I was in a massive cavern of earth and stone. It was what I supposed a natural cavern must look like. The jagged walls were uneven, stalactites hung down and stalagmites rose upward.

My strange, floating descent continued, and I came in to land on a flat shelf of dry rock in a wide ocean of dark water. I saw other such islands throughout the cavern, but none close enough to get to. A strange scent filled the cavern, a mixture of sickly bitter and mouth-wateringly sweet.

I waited for what I knew was coming. A sight I knew would terrify me beyond reason. I stared at the water in front of me and waited. My pulse pounded in my temples, and despite the cold, sweat beaded my small forehead.

And when I thought the anticipation might kill me, the serpentine flesh broke the water.

First one crimson head, then another, and another. Long-snouted and sharp-toothed, each had vertically slit pupils in deep, emerald-green eyes.

Eyes which stared out at me from the shadows of seven draconic faces. Fourteen eyes reflected the orange light of the cavern in a sickly green glow.

Breaking the surface of the water, they sloshed dark liquid onto the island before me. Together, they reared up and glared down at me for a moment before the expression changed. It changed into something far more complex than I would have believed.

Although I felt it had to mean something, I couldn’t tell what. From a person, I might have understood the look, but from this creature, it left me feeling more confused than ever.

Each of its eyes held a different expression. The left eye nearest me looked almost affectionate, while its counterpart looked bored. The four eyes to either side held malice and wrath on one side, and amusement and curiosity on the other. Another held confusion, its counterpart helplessness. One even looked worshipful, while the last was murderous.

The wide array of emotions bearing down on me all at once took my breath away. My vision started to swim and the cavernous world around me spun.

When the spinning became too much, I closed my eyes and collapsed to the cavern floor. My world went black.

I awoke with a hoarse gasp, like a suffocating man trying to breathe air that isn’t there. Yet I was breathing. I knew I was breathing. I could hear the breath flowing in and out of my nose. I could see my chest rising and falling with my breaths. But my chest was on fire! I felt like I hadn’t taken a breath in hours, and the burning constriction I felt inside was only growing.

I tried to call out for help, but couldn’t find my voice. I couldn’t move my fingers, and my vision was fading! The panic grew more and more difficult to overcome!

I gave my most powerful effort toward thrashing around, trying to get someone’s attention. Unfortunately, I effected little more than a slight lift and turn of my shoulders for the effort.

But moments later it all vanished.

I felt my lungs open and receive oxygen, my cells flooded with nutrients. I could move again!

My body felt inundated with more energy than I could remember ever feeling before, in all my ten years of life.

It was the strangest experience I had ever had.

Back in my own bed where I should have been, I thought, why do I keep having that crazy dream? Is it supposed to mean something? Or am I just losing my mind?

I rolled my head to the left and saw the blue glowing digital display of the alarm clock on my nightstand. It read 6:06 a.m.

I shrugged my bare, thin shoulders and sat up in bed. I was buzzing with energy, and it was less than an hour before I had to get up to get ready for school anyway. Grabbing my iPhone from its cradle on the alarm clock, I jumped out of bed, springing across the floor to my dresser. I grabbed my new high school uniform and bounced from one foot to the other down the hall to my bathroom. It was mine, in spite of my adoptive parents labeling it the ‘community bathroom.’

As if that actually meant anything when there were only three of us in the huge house. Plus they had two bathrooms of their own, anyway.

I turned on my favorite Iron Maiden album on the old iPhone and, since I had plenty of it, I took my time in the shower. I enjoyed the steaming hot water on my body and the screaming guitars and shrieking vocals in my ears. Best band in the history of music, I thought.