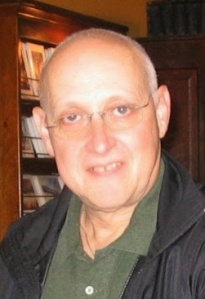 Howard Richard Debs received a University of Colorado Poetry Prize at age 19. After fifty years in communications, and an Educational Press Association of America Distinguished Achievement Award, he resumed his creative pursuits. Finalist and recipient 28th Annual 2015 Anna Davidson Rosenberg Poetry Awards, his work appears internationally in numerous publications recently in Yellow Chair Review, Silver Birch Press, Syzygy Poetry Journal, Dime Show Review, the Clear Poetry 2015 Anthology, his essay “The Poetry of Bearing Witness” in On Being – On The Blog, and his photography in select publications, including in Rattle online as “Ekphrastic Challenge” artist and guest editor; his full length work Gallery: A Collection of Pictures and Words (Scarlet Leaf Publishing), is forthcoming in early 2017.

The train readies to pull out of the station, heading first to Baltimore.
It will be a long day for the head conductor on the train;
he looks down at his pocket watch to make sure the time is right,
snaps the watch’s cover shut, yells out his “All Aboard”
and the privileged few allowed on this solemn journey scramble into
the passenger cars. There are some twenty guests in all, Washington officials,
close associates, a few relations, including son Robert. It is April 21, 1865.
An hour before the caisson carrying the President’s body slowly rolled along
Pennsylvania Avenue bound for the train station from the Capitol rotunda
where a constant stream of mourning citizens passed by his open coffin
to pay their respects to the man that led them through the crucible
of hell that was America’s Civil War. It has been four long years since
April 12, 1861 when the sitting duck in Charleston Bay, Ft. Sumter,
was attacked by Confederate shore batteries and in that time
620,000 Union and Confederate dead accumulated
on a roster of agony and pain for a nation struggling for its life.
Many in the North are angry and in despair over Lincoln’s assassination.
A point blank shot to the back of the head from a madman’s derringer,
a rebel who would not give up the fight for Southern rights,
has taken their leader from them just when he is needed most;
the aftermath of this debacle will be hard on all. Feelings run deep
on both sides of the Mason Dixon line. Healing wounds much need
the steady hand of the Great Emancipator, but he is gone, to be laid
to rest in his home state Illinois, in the town he called home, Springfield.
They will be waiting for him there, including a one-armed soldier
who comes every day to the intended burial site,
but one in a war which saw 100,000 amputations
done under the worst of battle field conditions,
filling towns with hobbled veterans whose fellow citizens
do not always look upon these men with sympathetic eyes.

Retracing the route to the White House to start his first term, a caravan
of railroad cars heroically pulled along by Engine no. 49, pride of the
fleet build by McClellan Rail Car Co. of Wichita Kansas
is making its way from Washington, with eleven stops in between,
before the funeral train arrives at its final destination.
Planned ceremonies will take place, and the people will come to say goodbye
to Honest Abe. Farmers, seamstresses, factory workers. They will stand along
the railroad embankments, behind wooden fences in fields, on the outskirts
of the cities and on station platforms of smaller towns, the whistle stops;
standing there waiting for a chance to see their cap’n pass by as Whitman’s
poem will recite. It is a sad time, a tumultuous time, a time fraught with fear
and trepidation for an unknown future, as the way of the past has been
annihilated along with hundreds of thousands of men and boys in blue and gray
on battlefields like Gettysburg and Antietam. Abe Lincoln, homeward bound.