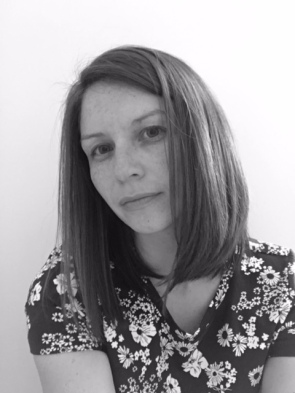 Katie Strine tolerates life through literature and dark beer. She lives in the east suburbs of Cleveland with her family—husband, son and dog—who accompany her on oddball adventures. If you enjoyed this story, please visit The Writing Disorder and Wayne Literary Review for more.

Below is Part 1 of 2 in a series of installments for Visitant.

Rune pulled the scabs off his flesh. He saved the tiny, scratched pieces of skin in an Altoids tin. He presented them to his girlfriend—a look what I have—and when she wasn’t repulsed, he knew he had met someone special.

He liked to aim his BB gun at the closet wall and shoot, shoot, shoot. He counted the holes. He poked his fingers into the drywall, felt the hum of air on the other side. He licked his lips and scratched his hips. Skin exposed. Shirt on the floor.

Magena laid in bed behind him and watched his pants drop below his waist. She eyed his underwear line, a graying hue that didn’t make her feel sexy but made her want sex at the same time. It must be the gun, she thought, and she dug her hand between her legs.

She worked at a dry cleaner’s. The small shop pushed in around her and she considered the customers to be just like the circulating hanging clothes: wrapped in plastic, unemotional, protected.

She removed stains of varying colors and speculated their origins. She pretended the scenes in which they transpired—a deep red reminded her of the obvious and she listed all the reasons people bleed.

He worked, too, across town at a machine shop and came home smelling like sultry oil. Like a human robot, she thought, when she dug her nose into his body and rooted for his smell.

They clanked together their odd formations of life and tried to weld it into one.

He opened his finger one day on a machine and, wanting to avoid a hospital fee, had another guy from the shop stitch it up (A retired paramedic, he told Mag later that night, he knew what he was doing. See? It’s sealed up. Closed. Nothing hanging out, right?). But days later puss bubbled at the raw edge of the black thread. Like an oozing worm on a hook, she noted. She joked about amputation. The number nine making its way into punchlines. He reported back to the retired paramedic but the gray bearded man, clad in an Allman Brother’s peach t-shirt, shrugged his shoulders and suggested he try the pharmacy’s minute clinic.

She tried to ignore it. Wedged onto a single mattress, the box springs loud and decayed underneath them, she pushed his hands over his head and focused on other things, but she had wild buck teeth and he wouldn’t let her give him head.

They adopted a dog named Adolf. They asked about the name and the young girl behind the desk pointed at the dog’s snout—sure enough, a rectangular patch of darker fur hung like a mustache and that was that. They took him home to Rune’s efficiency apartment they had started to share. Mag moved in after admitting she lived with her parents (a jealous dad and a mousy mom), and he invited her to stay. Only a week had passed since the laceration of the boy’s finger, and now he had two roommates.

In the middle of one night Adolf stuck his wet nose with the dark patch of fur into Mag’s face. She tugged herself from sleep and dragged him down the one floor and out to the small yard of grass in front of the complex. She kept her eyes closed while he sniffed and lifted his leg. She raised one crusted eyelid to check on him and turned to her left.

You scared me, she said to a man who appeared there on the lawn, the moon’s light behind him. His blackened silhouette stood still. She tugged at Adolf. Bark, you damn dog. But she felt no weight on his side of the leash. She looked toward where he had been, but he was gone. She looked again to her left and the man was gone, too.

What the fuck, she said under her breath. A cloud drifted over the moon and the lawn disappeared.

She climbed the stairs, thought to bother Rune, grabbed her keys and clambered back to her car. The steering wheel pressed against her grip, her pointed knuckles at one and eleven. She’d sauntered into the oily night in her pajamas: a second-hand nightgown, white with a lace edge—a minor hole on the side. It could pass for a summer dress if only the hours belonged to the sun.

She drove slower than the other cars and darted her eyes from the road ahead to the road’s brim, the tree line, but spotted only a dead deer. Its body sliced open. Organs exposed. Red, pink, raw remnants of life. Eyes open and staring at death.

She squinted against traffic’s headlights until she felt a migraine. A hot, black bulb buried behind her left eye. She blinked at a water mark, a waving sliver, in front of her right eye.

She’d driven and driven without attention to the roads. She thought she stayed northeast, the shoreline to her left. The vast blackness of water competing with the blackness of night.

A hard-boiled finger tapped on the window. Rune’s finger. She jumped back for fear of mangled flesh.

Excuse me, miss? You can’t be here. No trespassing, a man’s voice bounced on the car window and Rune’s finger pointed. Miss, can you hear me?

The keys rattled to life and started the car and she rolled down the window. His flashlight knocked at the interior, over her eyes, into her black pain. An echo of throbbing repeated and she blocked her eyes. I have a migraine, please, sir, your light. I have a migraine and needed to rest.

He let the light fall to his side. He asked other routine questions: Where are you driving from, where are you driving to, where do you live? She answered with some truth about Adolf and the efficiency. I can drive, she promised. I’ll get back home and hang flyers for the dog tomorrow.

Very well, then. See to it that you do.

She listened to him but stared through the window of her Sedan. A figure on the beach, the outline of a man. She asked, Do you see him? Out there? She warped a finger into the air. But the policeman was already behind his steering wheel, his lights reflecting on her rearview mirror. She started her car, too, for appearances. She drove in idle speed, crossed the street, and parked her car out of view from the main road. On foot she crossed back to the beach. A strand of light threatened to break her cover. She skidded quickly away from it.

Grains of sand worked into her shoes. The gritty, sandpaper feel rubbed at her soles. A crush of lake waves repeated. Constant. Soothing. She liked patterns and cycles. Like the clothes circling around her at the dry cleaners. It kept her head in order. It felt sane.

She imagined what she would do if the man appeared again here. Holding her dog. Walking him on the beach in the middle of night. Bitter blackness hugging their sides. She faked conversations, asking him questions and hearing his responses or vice versa. What are you looking for? He asked of her. In this expanse, where could the search end? She felt trickery in the question. She felt riddles on his tongues. Still she wanted to provide answers. She wanted to obtain clarity in her own mind. She stepped her sand-covered feet through the beach back to her car and asked over and over again, where does the search end?