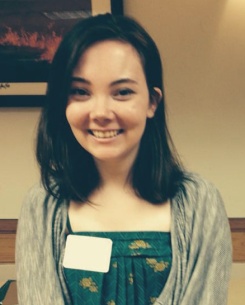 Chloe Seim has been honored with the 2017 Langston Hughes Creative Award in Fiction and was selected as runner-up for the 2015 Lake Prize in Fiction. Her work has appeared in Midwestern Gothic and is forthcoming in The New Engagement.

It was the summer the world caught fire, just below the top soil, that you left. At first we thought the burning and perpetual haze coloring our faces violet had migrated from a distant wildfire. The stench affixed to the inner hairs of our nostrils the cooking of grass, trees, coyotes, hundreds of cattle, surely, as it had been before, when I was younger.

You had never experienced this, growing up in Honduras.

There was a different kind of burning there, slow and still but cooking you from the inside out, you said.

I never asked if it was the same flame, that came that summer. But it had to have been. You never wanted to go into detail, only that you could not exist without shaving down the edges. Buffering the frame to smooth, smooth curves.

You didn’t leave in the summer the world caught fire. You were taken, weren’t you? You were caught up at work, in the grocery store, at the gym, on the cracked, narrow street leading to our apartment. You were branded. You were shipped like cattle, perhaps burnt like cattle.

You told me there was history in that road, snaking its way to our home. A secret waiting to erupt, to fill the world with ash, and you were right. It roared sometimes at night and you guessed that is where the burning began. It parched our skin and caked the soles of our feet in blisters that we popped for each other with heretical glee, hiding in the reserve of the bedroom that became not mine but ours. We skipped hopscotch on the asphalt, glowing, writhing at dusk to remind ourselves we were animal. We swallowed cubes of ice and charred meat, fresh-cooked caramel and blocks of salt of the agricultural kind. We made a home out of that road, too.

The years I wasted on unfamiliar faces after that summer. The salt I licked and licked and absorbed into my pores and bones and never retained.

On a Wednesday, it rained. The sky turned green, which I told you meant a tornado was nested somewhere, working itself up. But this town was never touched. Cyclones went right around, hopped over. We ran out onto the street, first. Kicked the rain barefoot. Kicked each other. Slapped the asphalt and laid our mouths open to the sky. You kissed me. You told me this was the end of the world, and sucked in the steam of the rain that would prove futile.

We ran to the grass and lay there, feeling the churn of the life growing below. We caked on mud and leaves and watched a funnel form above us and drift on, out of reach.