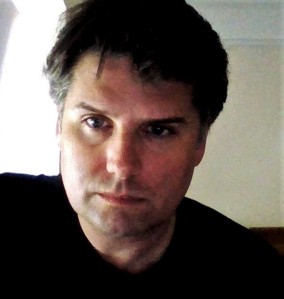 Michael Davis’ short fiction has appeared in over 33 magazines and journals and he has published two collections of stories, Gravity and Cruel Stars. He has an MFA in fiction writing from the University of Montana and a PhD in English from Western Michigan University. He lives in the United Kingdom where he works as an academic editor and freelance journalist.

You Are Somewhere Else

The tourists and their wallets are green and blue, hot pink and maroon in the slanting light. But I am getting thinner. And my hand is pale.

It floats easily, simply, into the bag hooked on the chair behind me. The waiter watches me do it and smiles. I smile at him. It’s almost too much to smile anymore, every movement an investment, a down payment, a thought about the future.

In the shadow of the buildings, the light comes down sideways and the tourists murmur. They are German, Italian, Japanese, American. The day I see a Mexican is a lucky day. The day I hear a Brooklyn accent will be a day outside of time. And the surfers of Malibu under Navštivte krásné Malibu, and the lights of Fiji on hanging postcards, and the antique cameras of collectors poised in window displays—these are my omens, my auguries.

How much thinner I’ve become is no longer a matter for idle speculation. The matter of my weight loss—that I don’t eat the way one should, that I’ve slept in alleys and danced on bridges and exited by windows in the rain, my dope-fired heart surging in my chest, about to pop—is merely a question of numbers now, only for a learned doctor to measure how I can be living more like I’m dying. I would appreciate seeing a doctor soon. I would really, really appreciate an understanding nurse, clean walls, someone in white who could tell me how I might continue.

My hovering hand returns with a leather wallet, stained burgundy, that smells like Dior. Now my hand smells like Dior. And my pocket. And the streets off Charles Square will smell like Dior when I hold the wallet to my face and breathe in the money, the pure thickness of it that passes for life, for nightlife, in this Praha of my dreams, of my sorrows, of all my footsteps on all the cobblestones, as I wake and dream and sometimes move in-between.

I pay for my beer and the blonde waiter with cropped hair and a scar that blends into a long dimple, waves. His hatred of tourists fixes his grin when he brings the check and the sweet smelling woman begins to panic, one wallet lighter. I move into the crowd of the square. The light is falling. And it isn’t anything like a simple, vertical American light. The light always falls sideways here, always crooked, not unlike my heart.

A heart can go sideways in a moment. But the swans in the fountains stay straight, their wings spread open, their necks arced like snakes—as snakes would rise if drawn up from their reptilian dream the way dinosaurs are said to have slowly entered the air as birds. And how much swaying and arcing must there have been to translate them into flight? And at what cost? And what was lost?

On Starometzke Street every restaurant sells pizza and tortellini, beer and dumplings. Waiters in white with black aprons. Narrow, vinyl pavilions over picnic tables and crowds of Japanese ordering salads by gesture. Everyone comes to watch Mikuláš’ enormous clock strike eight, the Apostles, Vanity, and Death clicking out for photos on the same track they’ve taken since they were added in 1866. But I am merely hot. Or I am cold. Or I am inhaling the wallet and its 700 koruna that smell like J’adore in spring.

And, if I had the energy to smile, I would, believe me. Over my shoulder, Saint Matthew emerges and the crowd puts down pasta forks to clap. Flashbulbs strobe Death’s lantern, while a woman without her wallet pleads to a constable farther back in the square. I have seen it many times. She is the American who has run afoul of the infamous Gypsy pickpockets of Prague.

Death is Death. Vanity’s mirror is gold. And I am the man who made a mistake coming here three years ago, and who has now taken her money, and who has a sideways heart.

The next time I see her, I might show her what sideways means. But I am possibly too thin to show anyone anything. The healthy, fat thighs of my countrymen, heavy and smooth in moonlight through a window—I’ve done feats with these, the taste of pillow dust on my tongue, a lick of breath on the unheated air of my room. But this is not the nightlife I wanted, not what I came here to find. This is not any kind of life. This is survival. It is June, high tourist season, and time to survive. I’ve survived here for three years off tourists, off friends, off the nightlife I never wanted, waiting for you.

A man can wait until he’s dead. His life will sputter out. And then all the romantic couples strolling the Charles Bridge and the distant lights of the cathedral and the dead eyes of the blackened saints and the golden pegasi shadowed in rooftop floods and the junkies throwing up in doorways will all disappear.

And you, my forgetful love, in your high house with its yellow windows and bars and unknowing Aleksander, you, only you, will remain. Because there is no one else. No one. These crowds are dead to me. The square and its lights fall behind. The streets get quieter, the dusk is blue against black where the buildings run high. I make a left, a right, another right. I step through the wooden door to the alley that smells like rot.

I only see you in my dreams now, as these dark streets are a dream. A dream of sadness, a dream of night—there are streets here that the sun never hits where pale mold grows up from the cobblestones. Medieval streets. Walls with useless rusted hex-bolts 400 years old. Warrens of junk in courtyards, the chassis of cars, crumbling brick, narrow avenues of steps, black doorways. If I see a light, it will be less than a spark, high up where the windows aren’t boarded. But tonight, there are no sparks. There is only starless blue where the buildings part and my memory of these steps, taken again and again in this three year dream, leads me on.

There. Petr. Nothing more. Just Petr. No phone. No place of business. He arrives in the yard twice a week. And therefore, so do I. A short kid in a jacket with a growth of beard. His English is better than my Czech, but we don’t talk. I hand him 400 Kč. He hands me two grams. This is our exchange. But I am getting thinner, and he’s staying the same. The tip of his cigarette makes the side of his face pale orange. He snaps a tiny flashlight on and looks at the bills. Good. Petr turns and I’m by myself in the dark.

The lights of Prague have scoured the constellations from the sky. I cough into my sleeve. And you are somewhere else.