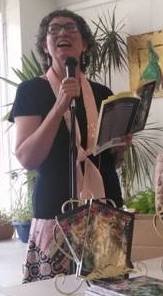 Kyle Laws’ collections include This Town: Poems of Correspondence with Jared Smith (Liquid Light Press, 2017); So Bright to Blind (Five Oaks Press, 2015); Wildwood (Lummox Press, 2014); My Visions Are As Real As Your Movies, Joan of Arc Says to Rudolph Valentino (Dancing Girl Press, 2013); and George Sand’s Haiti (co-winner of Poetry West’s 2012 award). Faces of Fishing Creek is forthcoming in 2018 from Middle Creek Publishing.  With six nominations for a Pushcart Prize, her poems and essays have appeared in magazines and anthologies in the U.S., U.K., and Canada.  She is the editor and publisher of Casa de Cinco Hermanas Press.

A gap in exigency across the wall of sand
to tide, I walk to the low, you down the strand
to find an unbroken horseshoe crab. Across wind
I tell you of an exhibit where they are gilded.

Swirl of bay uncovers a dolphin’s sleek skin
off starboard as we ferry to the grave,
churn up ashes leaked from a burial at sea.

Winter berries of holly, a cardinal in flight,
autumn sumac the emergency store of ringed
pheasants, the blood shed with wormwood or gall.

Birds dark in moderation, the gull, the plover,
the red-winged black, no crow call, no raven soar,
moon on vacation in a fortnight’s cheap rental,
we wait for the spill of light under the door.