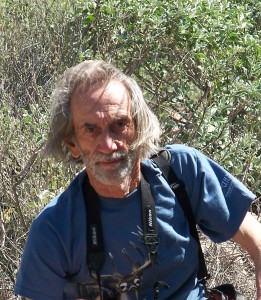 David Chorlton was born in Austria, grew up in rainy Manchester in England, and after spending most of the 1970s in Vienna he moved to Arizona. Since arriving in Phoenix he has pursued his writing, and been active in various capacities in the poetry world. The Bitter Oleander Press recently published his translations from the poetry of Austrian poet Christine Lavant as “Shatter the Bell in my Ear,” adding to collections his own original work over the years of small press activity. He does not complain about the heat, even at the height of summer, but does often register discontent at other circumstances, and come to believe in a balance of aesthetics and edge in art.

The bees are coming. Nothing can stop them. There so many, we cannot hide from them. No lotions repel them. Their droning overpowers every other sound. They come in a heat wave, directly from the sun: golden fire, sunflowers exploding, lovesick soldiers wanting only to rub their yellow fur against our cheeks.