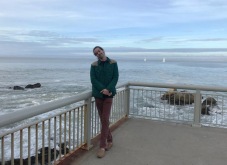 Jake Zawlacki currently writes and lives in the California Bay Area. He has been published in The Citron Review, Riggwelter, Eunoia Review, Gravel, Litro and many others.

“My damn hearing aid fell out.” The two had been panning for gold. Manzanita and red shank covered the shale mountain. The stream struggled through the curves, carving a wet highway. The other man laughed.

“Find something and pay it off you grouchy old bastard.”

The old man snorted or swallowed or gargled what was left of his life in the back of his throat in the way old men can. His face showed him. Sunlight, cigars, and a couple of long bourbon nights chiseled into his flesh. Forgotten nights and days and weeks swallowed down past’s hollow throat.

The old man looked to the young man.

The old man “hmm’d” himself and went back to his mind. At what point do we stop looking towards the future and start remembering the past? Is there only a sunset between the two?

The old man remembered his daughter. Always the same. He sat in the grass watching her look at the fireflies. He knew it was cliché, that parents thrived in these moments, but he didn’t care. He sat and watched the young girl dancing for what felt like an eternity until his wife came out and sat next to him in the darkness.

“She’s beautiful isn’t she?” She asked him.

“The most beautiful thing I’ve ever seen.” He said.

“What was that?” The young man said.

“Huh? Nothing, nothing. Stuck again.” He said.

“That happen a lot?”

The man nodded his head and went to shuffling the oxidized copper pan in the dirt and water forming galaxies. Planets and meteors and stars swirled in his universe. The old man stared out across the manzanita into the horizon. He could smell sage and manzanita every time the wind picked up. The entrails of the Earth.

“Where did it all go?” He asked the younger man.

The young man looked to the bushes and the dirt and the sky.

The old man nodded himself back to the fireflies and darkness. He felt mosquitoes bite his legs, could hear the frogs and crickets arguing, and felt her head against his.

“You think we’ve done alright?” She asked him.

“I think without me you’d be screwed.” She smiled with her lips and kissed him on the cheek.

“What are you going on about?”

“It’s your hearing aid.” He laughed and handed the wet skin colored bean to him.

The old man threw it back into the stream.