Skip to content
Posted on November 26, 2019 by Visitant Guest 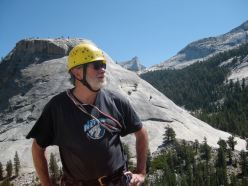 Robert Walton is a retired middle school teacher and a lifelong rock climber with many ascents in the Sierras and Pinnacles National Park. His publishing credits include works of science fiction, fantasy and poetry. Walton’s historical novel Dawn Drums won the 2014 New Mexico Book Awards Tony Hillerman Prize for best fiction and first place in the 2014 Arizona Authors competition. He co-authored “The Man Who Murdered Mozart” with Barry Malzberg, which was subsequently published in F & SF in 2011. Most recently, his “Do you feel lucky, Punk?” received a prize in the 2018 Bartleby Snopes dialog only contest.

Her naked shoulder turned toward me as she slid between two green boulders and disappeared like smoke in darkness.

Earlier yet, Abbas spoke beside me as dawn grew among declining stars. “Jonathan, today you will see the great treasure of our people.”

I rubbed my eyes. “It’s worth rising so early?”

Maryam affirmed from my other side, “It is.”

Abbas continued, “You enjoyed the feast last night – my mother’s rice with saffron, the lamb?”

“Very much – the yellow melons, too!”

“Does it not surprise you that rice grows, that sheep graze, that melons fatten here?” His left hand swept wide.

My eyes followed the gesture to rocks blood red in the sun’s first rays and silky dunes, pale as moonlight.

“Water flows beneath the earth through ancient ways to our fields, water from the Well of Souls. We could not live here in the sand sea without it.” Abbas lowered his hand.

Maryam murmured, “It flows even in dry years like this one.”

Her eyes glowed in the dawn’s light.

“Of course.” Abbas rubbed his dusty beard.  “Soldiers patrol far into the desert.”

Maryam added. “And the women of the well watch over the deep springs.”

“Women of the well?”

Maryam shook her head. No, Abbas, they are there and it is their tears – tears of both joy and sorrow – which bring back the rains.”

We turned our horses onto a blank slate of desert sands.

Our ride ended at midday before three hills, round as mares’ bellies. “Abbas?” I asked.

“The entrance is near?”

“It is hidden.” His dark eyes searched ahead. “Those rocks to the left are our guidepost. Come.” He jiggled his reins. Dust the yellow of cardamom billowed from beneath the horses’ hooves.

We dismounted an hour later and hobbled our mounts in the shade of two sandstone slabs leaning together. Maryam scampered ahead of us into a slit in the hillside. I followed Abbas into the opening.

Coolness enfolded me. Pools stair-stepped away into a cavern’s depths. Waters trickled from one to another like words meandering from grandmothers’ lips. Sunlight swords struck through crevices far above. One stabbed the farthest, greatest pool, made it bleed molten silver.

Abbas shouted, “Wait for us!”

She looked back, her eyes teasing like starlight on a midnight sea.

She cast off her robe and ran.

Her naked shoulder turned toward me as she slid between two green boulders and disappeared like smoke in darkness.

Gathering clouds deepened dusk as Abbas and I rode between fields green with new plants and on to the city.