My mother wanted me baptized with the middle name of Eve. It was 1953. The priest would not hear of it. In a covert nod to Church authority, she settled on the diminutive of “Evelyn.” I can’t recall exactly when she shared this anecdote with me. I do know I was old enough to realize I too preferred the all-powerful “Eve” to an insipid “Evelyn.” And so I joined my Mother’s subterfuge and claimed from that day forward Eve as my baptismal name.

My Mother also went by her middle name of Virginia. When I was 12 an embolism ruptured in her brain. Until that night she and I had resonated as if subatomic particles. But we then cleaved into a fission, were suddenly unwhole. Oblivion descended on what remained of family. Oblivion to her aphasia, which stifled what I’m sure were frantic thoughts. Thoughts entrapped within a voice that could still speak, yet not articulate. With meaning now short circuited by traumatic injury, expletives instead of eloquence ensued.

Intensive care did not yet exist. What the hospital did offer was a 1960s oxygen tent—forbidding dire contraptions. To me it may as well have been an iron lung on that first visit. When I entered its sealed atmosphere to kiss Virginia’s ashen lips, her air supply felt suffocated. On exiting that plastic canopy, I tugged my father’s arm, insisting it was broken. I cannot say for sure. Perhaps it was her brokenness I sensed. In years to come I’d often hyperventilate. What had been autonomic now tormented me.

When an elephant herd is decimated by poachers, females still too young for the role must assume their matriarchy. Survival mandates they learn quickly what, for eons, passed down gradually. Yet somehow they prevail. And unlike them, I’d only my own destiny to lead. Then as now, I looked to nature to sustain me. Beneath the willow in our yard I’d sit, imagining its grassy tendrils as a mother’s hair across one’s cheek when kissed goodnight. I recalled the old oak which had greeted me for years in our first yard. It once housed a mother squirrel and her three babies, their leafy drey high among the crown. I’d studied them so curiously.

One night a thunderstorm struck limbs apart like matchsticks. Come morning I searched out the squirrel family and found the babies tucked amid some foliage nearby. I feared they’d not survive. Virginia then appeared and said to me, “She’ll return for them. Squirrels make good mothers.” By next day they’d been whisked away to what I like to think was their new home. This lesson in displacement came none too soon. Not long after was the first of several moves for us as well. And with each one my people ever more dispersed. There’s no guarantee of empathy in the sharing of our DNA. As if strangers, we may go our separate ways.

In Africa, I once observed a pride of lions lazing after a kill. Their random stirrings invariably involved some touch of recognition. A nuzzling of necks, heads or ears, a draping of loose limbs. In the wild such social animals depend on these attachments to exist. These lions brush against each other as they pass to reinforce the bonds of brother, sister, mother. And the herds on which they prey move in units so attuned their flesh ripples as if one.

Consciousness is the soul’s connective tissue. Between Virginia and me, it was as if a butterfly effect. The gentlest of motions gave rise to ever higher frequencies. They say that memory can’t be trusted. Yet I trust mine as surely as an elephant recalls their kindred even after death. A scent which lingers on a tracking collar used in conservation will trigger reveries among remaining herd. They pause to smell, then carry off this token to honor sensate meditations. Only then do they move on.

Who hasn’t yearned for a return to Eden? To cradle like a leopard in a tree bough. To stride through long, sweet, silken grasses. To be lifted by the buoyancy of youth. In the retelling of our origins, we may rewrite our destiny. When Virginia faced her final hour, between us spanned a continent’s land mass. I flapped my gossamer wings. She heard a whisper in her ear, “My name is Eve. I am the giver of life.” 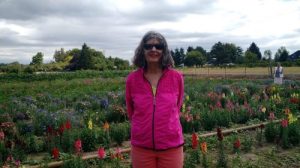 Karla Powell now lives in Portland, Oregon. She started as an essayist for Chicago newspapers. Over the years she’s published nationally in newspapers, magazines and book publishing. More recently, she has turned to such creative ventures as poetry and now flash pieces. This brief memoir captures her commitment to personal evolution.