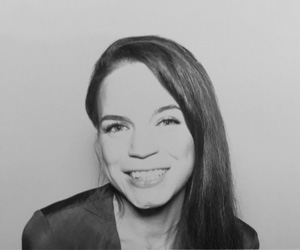 Anna Linetskaya is an emerging writer who, after years of academic work and legal practice, finally finds herself writing pieces she truly enjoys. She is currently working on her first novel while completing her MFA in Creative Writing at the City College of New York. When not working on her book, Anna is sure to be found reading books of others. She is unapologetic about her reading locations and is particularly proud of her reading-while-walking skill.

It was the dog’s impatient tapping of the tail against the wall that woke Clarissa up that day. She remembered the sound from the days when Rita was a puppy, way before the Company took over the bothersome aspects of dog ownership. Clarissa reached for her myLife device, but remembered she probably needed to pet the dog first. Why are you still here? she thought as the cold, wet muzzle poked her outstretched palm. It was already light outside; Rita was supposed to be out and on her way to her morning dog-run photo-shoot.

Clarissa rolled to her side and looked at the screen. 8:37 AM; 33°F, ENE wind at 14 mph, atmospheric pressure at 30.12 inHg, moderate air quality indexed at 65, cloudy with a chance of snow. That information she anticipated: the weather forecast had become extremely reliable as fewer and fewer people felt the need to leave the apartment. She made a mental note to mention this irony in her next v-share, and maybe shoot a short message to the developers as well. What she did not anticipate was the bold “0″ next to the message icon: no images to flip through, no memories to store. That had never happened before.

She looked around the room: not much there to catch her eye. With the abundance brought by VR, minimalism was the only way to go in real life. It took Clarissa a long time to find just the right kind of coffee table for her studio: cut out from a slab of ivory granite, it melted seamlessly into the white walls. Only a lonely succulent in a small terracotta pot—an obsolete token of affection from her brother—was floating above the table’s surface.

Clarissa looked back at her pet. Rita did a downward dog and started to whimper quietly. When was the last time Clarissa walked her Retriever? She could not remember. She wasn’t even sure whether she still had a leash in her apartment: myLife services provided all the necessary accessories. And what about winter boots? She didn’t recall any pictures involving those, or a proper winter coat.

No, there was no way she could handle it on her own. She had to figure out what was wrong with the app and, more importantly, how to make it work again. After several failed voice commands, Clarissa picked up the device and started to operate it manually; thanks to her love of picture editing, she was still quite nimble when it came to using the touch screen. She scrolled through the icons and opened Google News, a long forgotten source of information that somehow managed to survive despite its prescriptive single-author articles. Right away she found the piece she was looking for: a certain Daniel Fox was delivering breaking news about myLife’s global malfunction. She scanned the page. …A technological glitch of unprecedented magnitude… …millions of people behind the app left without support… …the memories and experiences of the affected are not expected to return before midnight.

Not before midnight. It was only 8:42 AM, which meant Clarissa had more than fifteen hours to live through without myLife. Fifteen hours with no dog-walkers, no virtual visit to the beach of Lantau she planned with her friend Francie, no customized meal deliveries to manage her sugar, no good-night hug from her father via mySense. It was just like the old days, when she had to navigate the bleakness of her existence while struggling to cope with her brother’s escalating depression after his wife’s death.

Rita’s whimpers developed into whines. Clarissa couldn’t ignore the noisy demands any longer: it was obvious that the dog needed to go outside, now. Stuffing the useless device in the pocket of her sweat pants, Clarissa got out of bed and went to the closet. Her mother’s old coat should keep her warm enough, she imagined, but what about shoes? A pair of old sneakers she used for the rare occasions when she physically took herself to an actual gym in the apartment building’s basement were the closest thing to winter boots that she owned. Rita barked; sneakers would have to do.

Luckily, Rita’s old leash was still hanging from one of the hooks on the wall. Clarissa took it off and put it around the dog’s neck. Even on the last hole, the collar felt loose; when did Rita become so skinny? She certainly did not look bony in the walk memories Clarissa received in the recent past. But the Company was undoubtedly capable of doing much more than fixing a dog’s receding health.

The unusually cold air stung Clarissa’s cheeks as she stepped outside from the main lobby, Rita shuffling clumsily behind; it was becoming obvious to Clarissa that the animal couldn’t move any faster. There was no playful tug on the leash, no spring left in her trot. Clarissa looked Rita over: the mischief she recalled from pre-myLife time was gone, together with the puppy she brought in a little over seven years ago.

Clarissa did not plan on giving Rita a proper walk, just a quick restroom break, but something stopped her from going back home. Her skin started to adjust to the low temperatures, and a gentle, pleasant heat began to settle in the apples of her cheeks. She decided a walk around the block couldn’t hurt either of them, despite the accumulating puddles in her sneakers and the slight unease somewhere to the right of her heart.

Clarissa observed Rita as they walked. This was definitely not the dog she marveled at every time she opened her ‘Pets’ folder. Or, rather, it was the same dog, but older, sicker and just so very tired. Why didn’t she notice any of these changes when Rita was at home? Well, of course she knew why: the myLife staff made sure to collect Rita before Clarissa’s alarm went off in the mornings and they brought her back late at night. The only thing Clarissa saw nowadays was Rita sleeping, curled down on the pillow in the corner. The Company did not lie: with their help, her pet had become almost as perfect as a stuffed animal.

Clarissa cleared the corner, barely missing one of the women rushing towards the crosswalk. Who were all these people that passed her by, dressed in black and dark-gray, carrying grocery bags and buckets overflowing with cleaning products? These streets, this block, it was her neighborhood; she moved here a long time ago, when she still wanted to be closer to her brother. She was even selected to represent her zip code during the recent myLife ‘Tribe Hall’ meeting. Yet, she could not recognize a single street sign or any of the faces.

She passed the old coffee shop she used to frequent with Francie before both of them started to use the app when something pulled Clarissa out of her reverie. There it was, her friend’s familiar form, framed by the shop’s window.  Francie was sitting at the table alone, her wavy auburn hair collected in a high ponytail. Clarissa tied Rita’s leash to the nearest bench, hoping that the dog still remembered how to wait outside without barking, and stepped inside the cafe.